Welcome to the seventh blog post for Warhammer Age of Sigmar: Tempestfall. In the first chapters, we will introduce you to the universe of Age of Sigmar, and how it all eventually came to Tempestfall.

Back in Ghyran, the Realm of Life, the Stormcast Eternals could not rest after destroying the Gate of Dawn. Even though Gardus Steel Soul managed to trick the Great Unclean One Bolathrax into crushing the Realmgate with its massive body, there was no familiar after-battle silence. Instead, there was a distant, maddening bray. 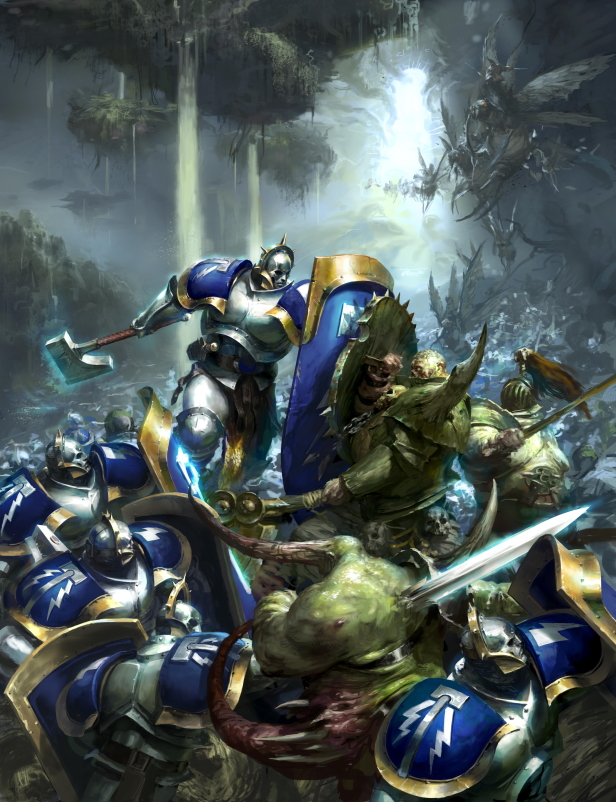 The Sylvaneth – who had helped the Hallowed Knights defeat Nurgle’s forces at the Gate of Dawn – quickly scattered and looked for a shelter that could protect them from the terrible, piercing sound. The Stormcast Eternals, although incredibly powerful, were also affected by feeling… despair, gloom. They were nigh invincible warriors of Sigmar, and yet this powerful bray kept reminding them of their frail humanity and mortal emotions.

Only one thing could produce such effects. A colossal Chaos artifact of Nurgle, called the Dirgehorn, has been erected somewhere many miles away. Its sound projected at a massive distance, no regular being could withstand the power. With direct orders of retaking all the Realmgates in Ghyran, as well as finding the goddess of life, the Hallowed Knights had an incredibly long, perilous, and miserable journey ahead of them. They needed the aid of Sylvaneth, and destroying the Dirgehorn became a task of paramount importance.

Every waking hour, the Stormcast Eternals marched forward. Not only did they have to overcome their human weaknesses, they had to fight the new inhabitants of Ghyran. Cultists, plaguebearers, beastmen, bloatflies – every living thing serving Nurgle crossed the path of advancing Hallowed Knights, and each time, even though utterly demoralized, the Stormcast Eternals raised their weapons and pushed back the harassing forces. Facing challenges and trials day by day, they finally managed to approach the Dirgehorn. No rest for the weary – the defending forces of Chaos had to be decimated, although this time the Hallowed Knights fought with unseen rage and fury, desperate to destroy the damned artifact and end this miserable mission. Their hatred has grown so massive, a Decimator-Prime hurled his greataxe with such strength that it struck a Beastman and still kept going, until it smashed the Dirgehorn in the end.

Sweet, merciful silence has finally fallen on the Realm of Life. Although rotten swamps still popped bubbles and insects buzzed overhead, the minds of those affected by the Dirgehorn were no longer pained and tortured. The Sylvaneth began to emerge from their hiding, and filled with a renewed desire for vengeance, they knew the next objective immediately. The rat-men of Clan Pestilens took over the Glade of Horned Growths, producing deadly, toxic fumes that the wind carried all over Ghyran, killing everything in its path.

Wasting no time, the Sylvaneth mounted an assault on the Glade. With the aid of Treelords, their offensive was fierce and decisive – the Skaven forces were dwindling with each strike, however the rat-men believed to hold an ace up their sleeve. In the middle of Glade of Horned Growths stood a corrupted Realmgate, unassailed by the busy Sylvaneth. A single, frail Grey Seer fell to his knees in front of it, and began to pray. The loyal servant of Nurgle pleaded for help against the deadly attacking force, pleaded for daemonic aid, and the Chaos god seemingly responded. The Grey Seer became filled with hope and pride, as the Realmgate began to hum and tremble. But, out of it came no daemon or Chaos worshipper. It was only Gardus Steel Soul, the Lord-Celestant of Hallowed Knights, who survived long days of being chased by the Great Unclean One, Bolathrax, in Nurgle’s Chaos Realm. 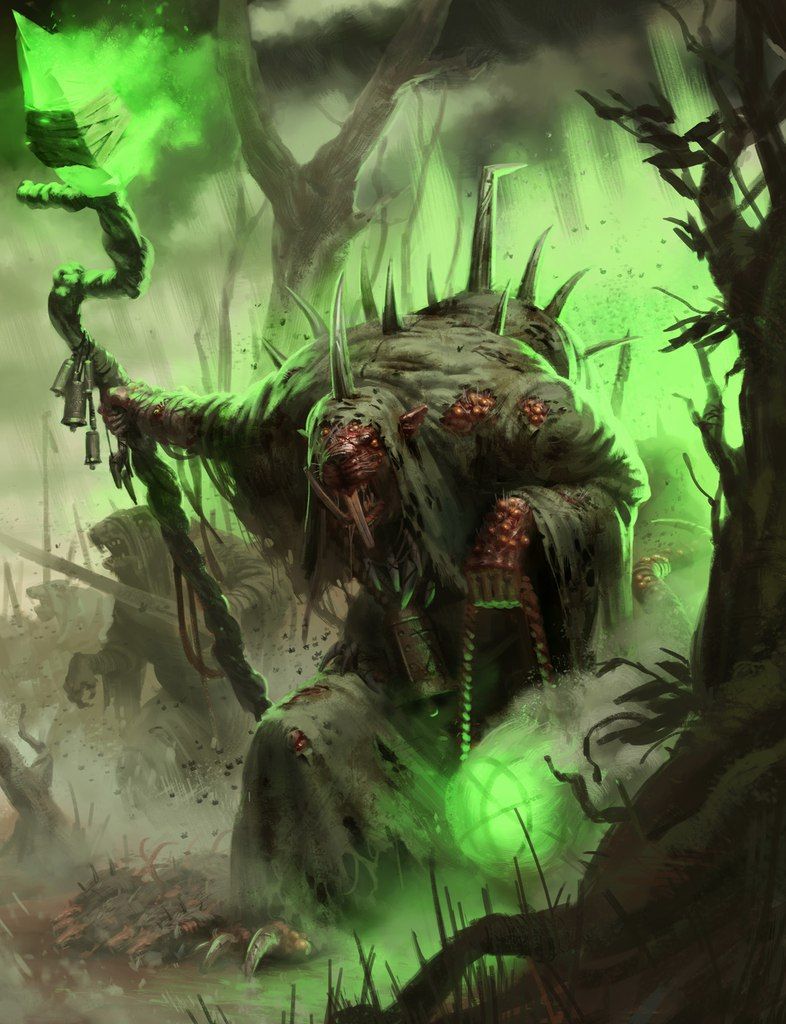 Covered in all sorts of festering, putrid essence, utterly exhausted, but alive, Gardus appeared in the middle of Sylvaneth assault on the Glade of Horned Growths. No rest for the weary, yet again – with no other choice, he raised his sword and rushed into battle.
Dryads, Treelords, and other Sylvaneth perished in great numbers, but the servants of Nurgle were finally pushed back from the Glade. Once the dust settled, and the enemy remnants stopped breathing, Gardus approached the Lady of the Vines – the commander of this Sylvaneth force. He had a prophetic vision and learned where Alarielle, the long lost Goddess of Life, resides. At the time they did not realize they were being spied on, as a Skaven Verminlord Corruptor lurked in the shadows, ready to follow.

Ghyran, as many other Realms, contained hidden pocket dimensions with one entrance. Supposedly, Alarielle was hiding in one of them, called Athelwyrd – it was also the source of a pure, revitalizing river running through the Realm of Life. There was one problem, however. One of the biggest Great Unclean Ones, if not the most powerful, was tasked by Chaos to continuously spoil and corrupt the river with its entrails and feces. Even though everything that touched the water would become healed and cleansed, it could not withstand a never-ending stream of putrid, rotting essence. A great deal of time and toil passed, as the Stormcast Eternals attempted to dislodge the giant from the riverbed, but with the combined strength of both armies, eventually the danger was disposed of.

With the great daemon out of the way, the Hallowed Knights were finally able to enter the hidden pocket dimensions of Athelwyrd. To their dismay, as soon as they stepped in, a host of Sylvaneth came down on them and struck brutally – the personal guard of Alarielle did not expect any visitors, and simply protected their Queen. This short skirmish came to end as soon as the Goddess of Life herself appeared and ordered everyone to stop fighting. Furious at the Stormcast Eternals for revealing her hiding domain, she made everyone realize they were followed. 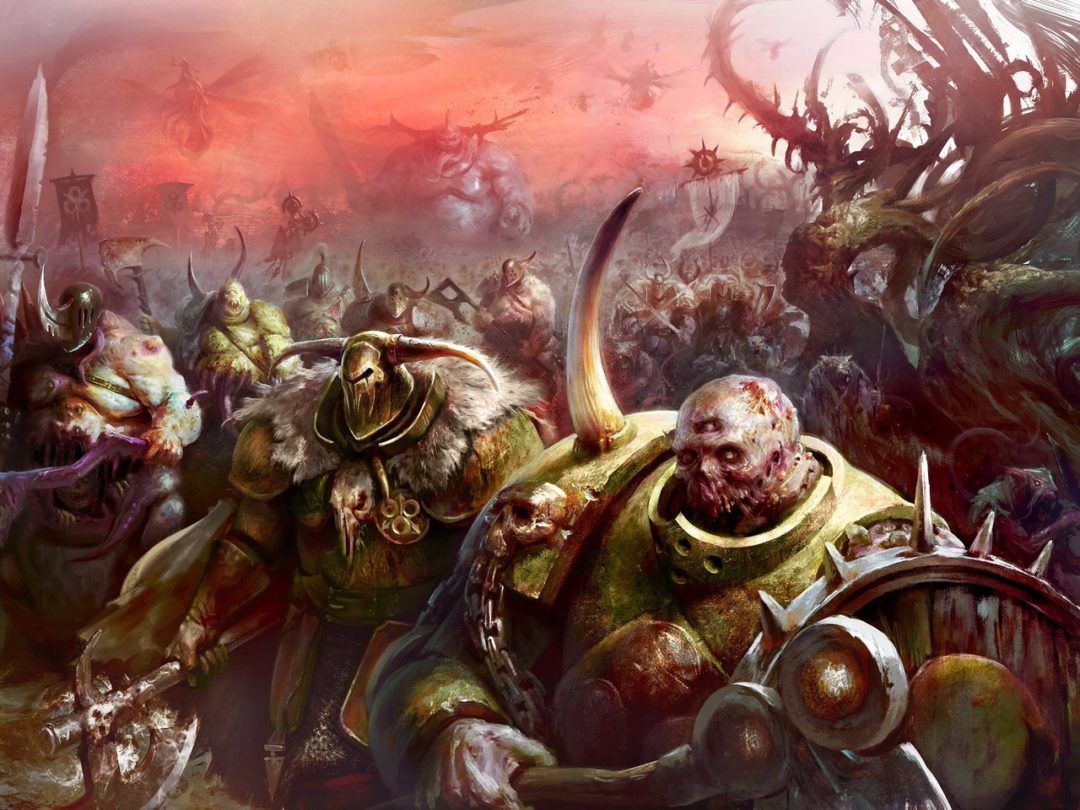 The greatest Chaos army the warriors of Sigmar had ever seen was quickly approaching their positions, and so the Hallowed Knights and Sylvaneth prepared for battle. Bolathrax, Clan Pestilens, Beastmen, Plaguebearers and other warriors of Nurgle were ready to feast – they were searching for her for hundreds of years, and now Alarielle stands before them.

Sigmarite armors and weapons clashed once more with festering armaments of Plaguebearers. Gardus Steel Soul, wanting to protect the Goddess of Life, lunged at his arch-nemesis Bolathrax. The Great Unclean One brushed off Lord-Celestant’s strikes, broke his limbs as if they were sticks, and before being devoured, Gardus was struck by another Stormcast Eternal’s crossbow shot. In a flash of lightning, he disappeared back to Azyr. Seeing this, Alarielle came before Bolathrax, and absolutely destroyed the daemon with a single spell, a single motion – such is the power of a god. Due to this however, she lost her focus, and Athelwyrd began to flood with the revitalizing river’s waters, splitting the battlefield in half. The forces of Order and the forces of Chaos were now separated, but one thing was certain – Athelwyrd was lost.

To be continued in Part 8