Welcome to the sixth blog post for Warhammer Age of Sigmar: Tempestfall. In the first chapters, we will introduce you to the universe of Age of Sigmar, and how it all eventually came to Tempestfall.

THE QUEST FOR GHAL MARAZ

Reforged in Azyr, the Celestial Vindicators descend once more upon the Realm of Metal, this time with explicit orders to reclaim Sigmar’s legendary weapon – the Ghal Maraz skull-splitter, lost during the God-King’s duel with Archaon the Everchosen hundreds of years ago. Accompanied by a smaller detachment of Hammers of Sigmar led by Lord-Celestant Vandus Hammerhand – the conqueror of Brimstone Peninsula – the Stormcast Eternals intend to breach Ephryx’s enchanted fortress from a different side. 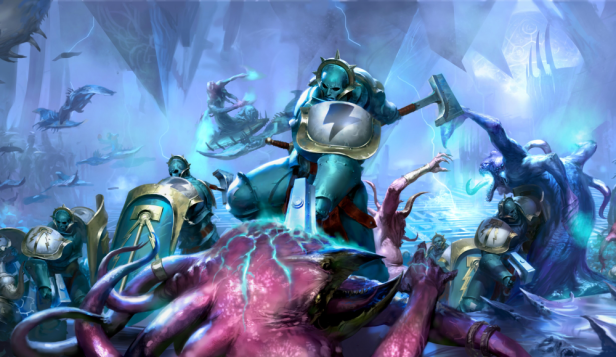 Not wanting to suffer massive casualties in a frontal assault again, the Celestial Vindicators intend to approach Ephryx’s fortress from the adjacent city of Steelmarch. This posed a logistical and positional issue, as the warriors of Sigmar were too many to safely walk through the narrow streets and alleyways. Retinue by retinue, the Stormcast Eternals entered the city, hearing strange whispers as if in unison.

Soon enough, the warriors realize they’ve walked into a trap set by Ephryx’s army. From the rooftops and corridors, from all sides, the armored fiends and bare-chested madmen worshipping Tzeentch came down on Celestial Vindicators and Hammers of Sigmar. Without their disciplined ranks and formations a chaotic skirmish ensued, but before any side suffered major casualties, a deafening shriek made both armies pause. In an instant, spectres and wraiths poured out of the buildings and cracked streets, and began slaughtering Chaos worshippers and Stormcast Eternals alike. 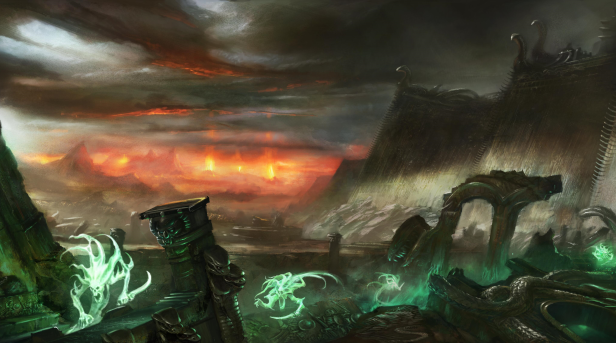 Lord-Relictor of Hammers of Sigmar, Ionus Cryptborn, sensed the wrath of the ghosts was misdirected. He attempted to communicate with what seemed to be their leader, a banshee Swordmaiden, Celemnis. Although they cannot speak in the humanly fashion, the banshees realized who were the ones that made them angered spirits many years ago in the first place, and promptly turned all their blades against the Chaos army. However, as some of Ephryx’s underlings managed to take away Celemnis’ keen blades, she appeared in the center of the battlefield and let out a decimating banshee scream in fury, killing every living creature in sight. The city square was now uncontested, and Vandus Hammerhand ordered the Hammers of Sigmar to march forward, before falling to his knees. In a prophetic vision, he saw a still, frozen river of silver, and massive drakes battling in the void. 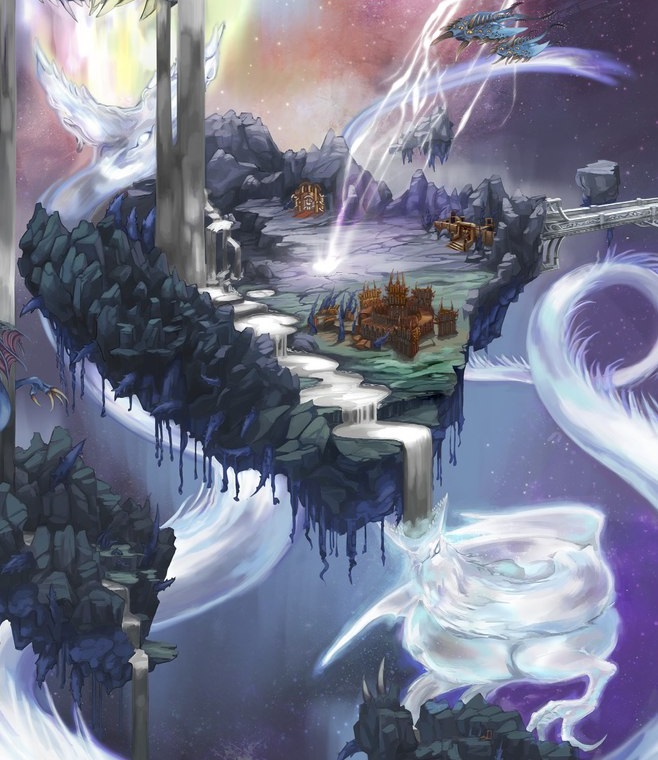 With the Celestial Vindicators righteously finishing off any remnants of Chaos followers, the city was secured. The Stormcast Eternals advanced and reached the edge of the city, but to their disbelief, the Ephryx’s eldritch fortress had disappeared, leaving only a gaping crater behind. The blast from Ghal Maraz the Chaos sorcerer used to end the initial siege in Realm of Metal had also teleported the structure entirely to a different place. Ionus Cryptborn turned to Celemnis and asked where did the stronghold go, and she pointed upward – to the uppermost floating isle of Chamon, the Great Crucible, where the river of silver poured down on the rest of the Realm.

The banshee then led the Stormcast Eternals to the Dragonfate Dais, a runic circle meant to communicate with gods. Vandus Hammerhand’s prophetic vision made the solution clear. A godbeast dragon named Argentine melted the silver in Chamon with its fiery breath, keeping it in a fluid state. The Stormcast Eternals made contact with Dracothion, the god stardrake who first found and awakened Sigmar back in the universe’s Genesis, and asked him for aid – to distract Argentine. When its fire ceased heating up the Great Crucible, the silver river solidified, and Hammers of Sigmar along with Celestial Vindicators were now able to climb the colossal, still waterfall. Once they reach the top, they are met by a Chaos army, confident that the river of metal would wash away any invaders. At that point Argentine had returned to its place, and the silver began to become malleable and liquid again. The Stormcast Eternals managed to overpower the meeting forces of Tzeentch who underestimated their adversaries, and made their way throughout the fortifications, until they finally reached the eldritch fortress.

It was there where the warriors of Sigmar would meet their biggest challenge yet. The Chaos sorcerer Ephryx did not sit idly by – to protect his prized artifact he hired a private army composed of seasoned Slaves to Darkness, he found and convinced Korghos Khul (the arch-nemesis of Vandus Hammerhand) to join him, and additionally summoned Kairos Fateweaver, one of the greatest daemon lords of Tzeentch. 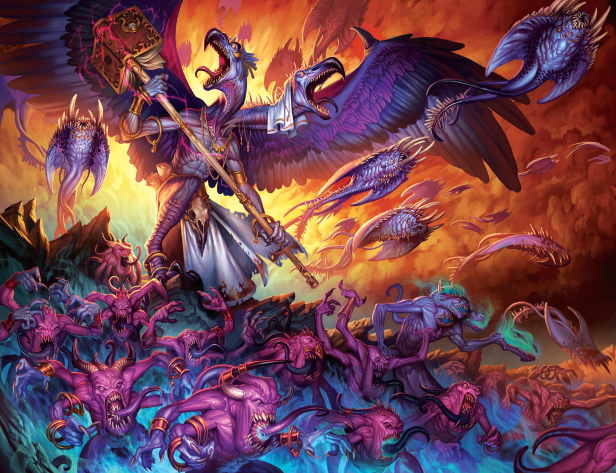 The magnitude of the battle that commenced was truly massive. Sigmarite weapons clashed with spiked armaments of Chaos warriors, as Korghos Khul rushed from the center chamber accompanied by the Khorne Bloodbound. Down that chamber, the warriors of Sigmar could see Ghal Maraz, protected by a nigh-invincible force of nine Lords of Change, with the emissary of Tzeentch, Kairos Fateweaver himself among them. Knowing that conventional battle would surely result in utter defeat, the Hammers of Sigmar and Celestial Vindicators formed a spearhead toward the legendary warhammer. With all sorts of magic blasts and relentless strikes coming at them from all sides, they began to crumble, but Vandus Hammerhand managed to reach and grab Ghal Maraz. Then, a giant white comet came down on them from the sky, and with the impact, the Stormcast Eternals disappeared in flashes of lightning.

The ever-vigilant Sigmar, watching from Azyr, wanted to ensure the safe return of his warriors, and sent a killing force toward the battlefield. Now, with Ghal Maraz returned to his hands, a devastating blow was dealt to the forces of Chaos in the Realm of Metal. Without this power source, Ephryx’s plot to turn all the Realmgates toward the realm of Tzeentch was thwarted. But, with Vandus Hammerhand’s second death and reforging, everyone would soon become aware of the toll it takes on one’s mind.

To be continued in Part 7