Welcome to the eighth blog post for Warhammer Age of Sigmar: Tempestfall. In the first chapters, we will introduce you to the universe of Age of Sigmar, and how it all eventually came to Tempestfall.

THE REALMGATE WARS – TO GROW A GOD

Although the Hallowed Knights fulfilled their task of finding the Goddess of Life, Alarielle, it came at a great cost. The hidden pocket realm of Athelwyrd was invaded by legions of Nurgle’s followers, and in the brief but vicious battle, the Stormcast Eternals lost their Lord-Celestant Gardus Steel Soul. Weakened and outnumbered, the allied warriors of Sigmar and Sylvaneth led by Lady of Vines had no choice but to flee and seek respite. The hunters became the hunted. 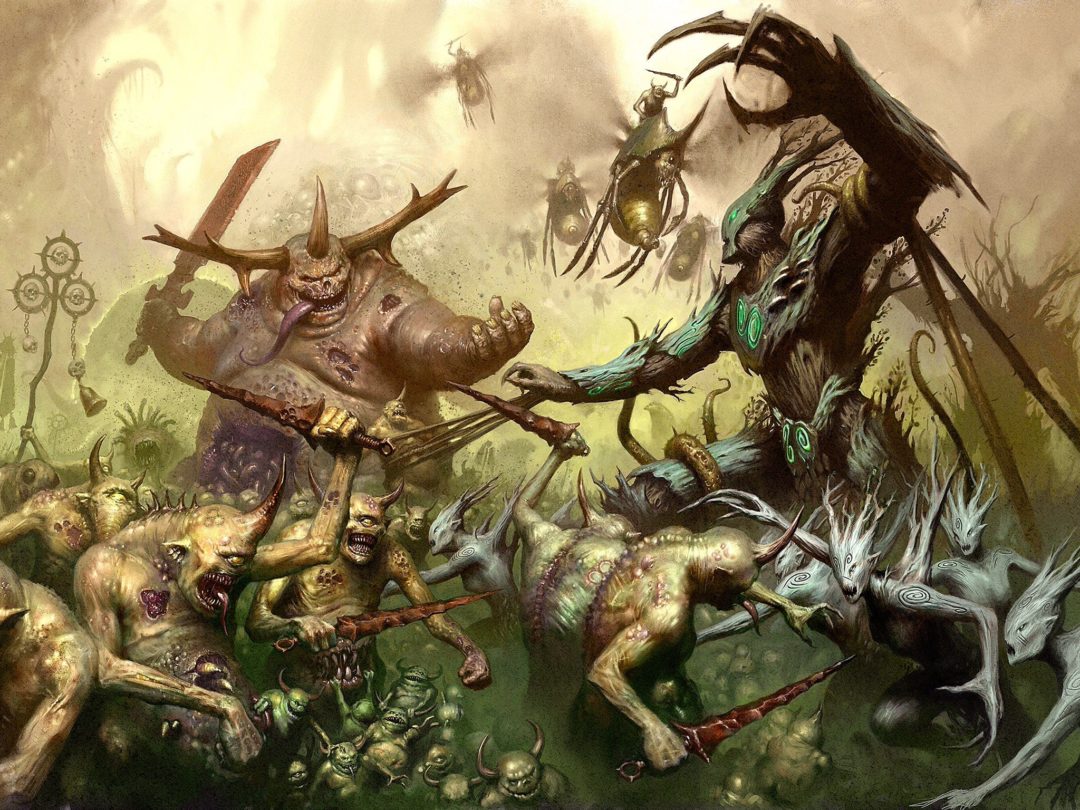 The Sylvaneth knew the lands of Ghyran better than any fiend or daemon, and certain secret pathways helped the heroes outpace the wrath of Chaos. At least, most of it. But it was not a chasing warband that troubled and pained Alarielle. Her soul, unlike other gods, was almost bound to her realm – if the land withered, so did her powers. Seeing and experiencing Ghyran first-hand after centuries in hiding, feeling the suffering of infected life convinced the Goddess she had failed in her ultimate purpose. Both as a protector, and as a mother. Succumbing to gloom and depression, Alarielle began to wither, just like the tree branches all around them. Soon enough, she shrank and transformed into a fist-sized soul-pod, a seed bearing the essence of the goddess. Her “death” came as a mere continuation of the cycle of life, but the Lady of Vines had a plan for the next step – rebirth.

Alarielle’s soul-pod needed to be planted in the soil, however just like any new life taking roots in the ground, it would absorb everything around it. If they planted the goddess in a place tainted by Nurgle, they risked a cataclysmic event of an immense corrupted force serving Chaos. The Lady of Vines, a Sylvaneth Branchwraith and now protector of her goddess’ soul-pod, decided they have to reach a place called the Blackstone Summit. Back in the beginning of Age of Chaos, dozens of united Sylvaneth tribes stood as one against the onslaught of the Dark Gods. The heroes of this first war found their resting place atop a lonely hill, and the Lady of Vines anticipated their uplifting spirits and furious zeal against Chaos would allow Alarielle to be reborn, full of hope and might.

However, to reach the Blackstone Summit was a lengthy and difficult task. Although the Sylvaneth and Hallowed Knights could outpace the main army of Chaos, Nurgle’s Plague Lord, Torglug the Despised, was in pursuit with his warband.

Torglug used to be a defender of Ghyran, but with the Grand Alliance of Gods dismantling under the weight of the invasion, his soul was twisted and corrupted by Nurgle. Now, as a champion of Chaos, he knew the same secret pathways as the fleeing party, and he intended to claim the boon his god was after for hundreds of years. 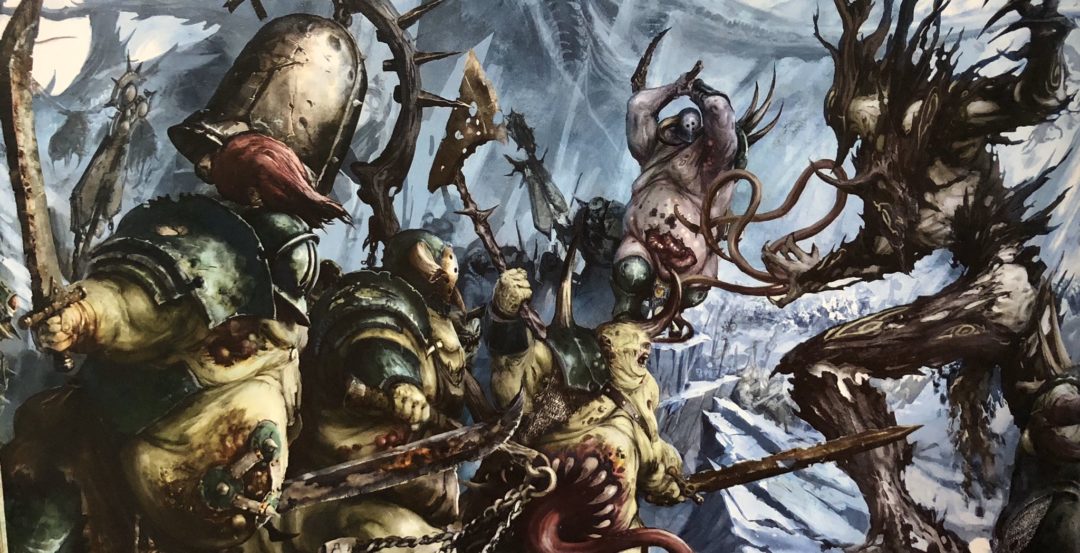 Every step of the way, Torglug’s warband kept harassing and striking at the travelling group of Sylvaneth and Stormcast Eternals. Time after time, the rearguard staunchly repelled attacks, until the party reached the edge of the Forest of Druidia, and the shore of the Sea of Serpents. Just as they were about to be encircled by overwhelming slithering forces of Nurgle, the Realm of Life came to the defence of its goddess. One of the fabled living winters, Jotunberg, a gigantic animate mountain, used the last of its strength to move into the Sea and perish there, freezing the waters and allowing passage on foot. The great escape continued, as the chasing Chaos followers struck against the Hallowed Knights’ rearguard, fell into the Sea through the ice cracks, or were stopped in their tracks by lightning bolts carrying Knights Excelsior – a much needed help from ever-watchful Sigmar.

Days have passed in battle, bloodshed and acts of miraculous heroism, but the Lady of Vines and Hallowed Knights finally managed to reach the far shore of the Sea of Serpents. The Branchwraith led the survivors along the Path of the Purified, an enchanted and healing place that would remove any taint of Chaos from Alarielle’s soul-pod. Hope sparked in the hearts of the survivors, but upon reaching the Blackstone Summit, weapons of war were drawn immediately, yet again. Torglug the Despised, knowing the same pathways and aided by Chaos, was already waiting there with his soldiers.

A desperate and vicious battle ensued, as the weakened and decimated Hallowed Knights once again had to step into the fray. Shields, warhammers and swords were plunged into festering daemonic flesh, and with each fallen Stormcast Eternal, the tide of battle looked more grim. Torglug hacked his way through enemies toward the Lady of Vines, and eventually lunged toward the Branchwraith. His strikes were delivered with such fury he cut off her arm grasping Alarielle’s soul-pod, crushed her body, and dealt a finishing blow with his greataxe.

But in that moment, a flash of light blinded the fiends of Chaos. As if a meteor came down from the skies, a winged, armor-clad avenger smote a pocket of daemons, then darted to another place on the battlefield, striking and decimating again.

When Sigmar’s legendary warhammer Ghal-Maraz was reclaimed by Celestial Vindicators, the god-king knew he himself could not lead the charge in battle anymore. But, the purpose of a weapon is to wage war, and not just exist as some symbol of power. Thus was born the Celestant-Prime, an almost angelic Stormcast Eternal, wielding Sigmar’s legendary weapon and bringing defeat to the forces of Chaos wherever sent. 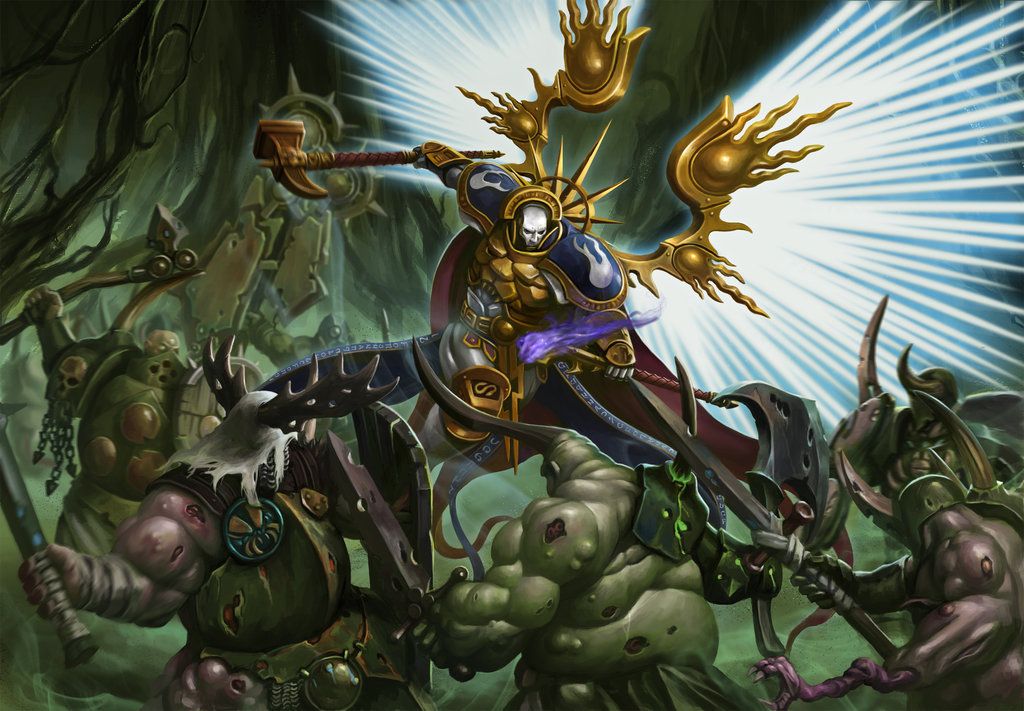 As Alarielle’s soul-pod (still held by the Branchwraith’s arm) tumbled down the battlefield, Torglug went after it, but the Celestant-Prime was vigilant. Darting toward the Plague Lord, the strike of Ghal-Maraz was so immense that the body of the champion of Chaos became separate from his soul. In that brief moment of separation, a lightning bolt carried Torglug’s soul to Azyr, while his festering, corrupted husk fell to the ground. A hero was about to be reforged and born again.

With the Plague Lord no longer in the picture, the remaining Hallowed Knights and Sylvaneth could kill the rest of Nurgle’s forces on the Blackstone Summit. Soon enough, the long-awaited moment of respite came, as the Stormcast Eternals planted Alarielle’s soul-pod into the ground. Now, the only thing left was to wait.

But this was merely a droplet in the ocean of war that raged in other Realms.

To be continued in Part 9