Welcome to Age of Sigmar – Part I – Age of Myth

In the events later noted in history as End Times, the God-King of mankind, Sigmar, had failed to save the Old World and its mortal inhabitants from the devouring wrath of Chaos and its champion, Archaon the Everchosen.

Grasping the Broken World’s molten core, Sigmar was forced to begin an aimless journey throughout the endless black void. The god’s wounds rendered him a shadow of his former self, bound to mere powerless existence. He had failed in his mission, and nothing could absolve him from this penance.

Years, centuries, eons… it is unknown how much time Sigmar had spent in this state. Until a glimpse of light, a celestial being, sensed the searing orb filled with power floating through the void.

Lured by the Broken World’s molten core, The Great Drake, Dracothion, discovered the battered body of the fallen God-King. It recognized an immense righteousness and love for mortal life in the curious finding. Judging that the motionless being is a kindred spirit, Dracothion breathed new life into Sigmar, allowing him to regain vital powers and forge his fate yet again.

The Great Drake led Sigmar to the gates of Eight Realms, and taught him the secret pathways to travel and find his way throughout the new reality. The Mortal Realms gained a new protector, and the God-King was resolved never to fail again. 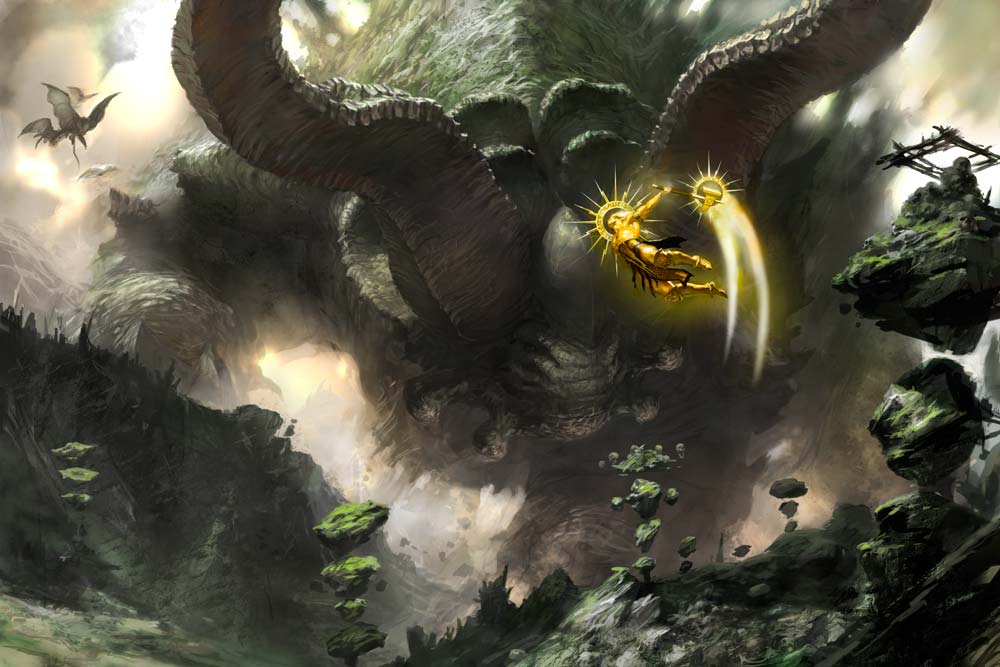 Knowing that Chaos and Archaon the Everchosen would follow Sigmar wherever he reigned, he began preparations for the inevitable confrontation. During his enlightening journey throughout the Eight Realms, Sigmar discovered and awakened many gods, who pledged their allegiance to him in gratitude. These gods have claimed patronage over the existing Realms:

In the celestial realm of Azyr, Sigmar established the capital city of Azyrheim, and began to bring order to the Mortal Realms. Primitive civilizations gained divine patronage, and guided by the gods and their knowledge, the nascent peoples ushered in an era of prosperity and technological advancement.

During that time, Sigmar travelled the Realms to destroy the primeval and eldritch beings known as Godbeasts, who endangered the newly found societies. Having realized some of them can not be tamed or slain, and having discovered ancient, indestructible artefacts of immense power, the God-King decided to create massive Stormvaults in Azyrheim. There, the dangers to mortals were sealed away for eternity, and the fact of their existence hidden from regular beings. The Mortal Realms, protected by the grand alliance of gods, thrived in this brief moment of utopian peace.

However, the taint of Chaos soon creeped into the Eight Realms. The mortals who hungered for unworldly power heeded the whispers of the Dark Gods, and turned to profane worship in cults scattered across the lands. Day by day, their faith and obedience grew, until their will finally caused the daemons of Chaos to tear down the boundaries of reality, and swarm into the Mortal Realms.

Sigmar and his awoken allied gods were prepared for this confrontation, and successfully fought back the invading dark forces in many different places. With each battle and skirmish, the allied armies began to falter, but the Chaos invasion was unrelenting, and unending. The corruption spread to the entirety of Eight Realms, eventually causing strife between the allied gods, who felt they abandoned their peoples while battling Chaos with Sigmar.

The God-King was determined to eradicate the threat of the Dark Gods once and for all, leading the armies of the Mortal Realms into the final Battle of Burning Skies. Wielding Ghal Maraz, his mighty weapon and conduit of power, Sigmar entered the fray slaying daemons with each strike. Victory seemed inevitable, until Nagash, the God of Death, betrayed the God-King and turned the undead armies against him.

Even in spite of this traitorous attack, Sigmar was finally able to face Archaon the Everchosen again. Before he could strike the final blow, the Dark Gods’ trickery fooled the God-King into casting his mighty warhammer across the Realms, rendering him significantly weaker. With the mortal armies waning, and with no way of achieving victory, Sigmar ordered his forces to retreat. He himself returned to Azyrheim, where the celestial gates became sealed off from the rest of the lands.

Virtually unopposed, the daemons of Chaos began to roam and devour the Mortal Realms.

To be continued in Part 2

Quick reminder there’s only one week left in the T-shirt and poster wishlist contest! To participate, all you have to do is send us a screenshot confirming your wishlist at giveaway@tempestfall.com – we’re waiting for your submissions! 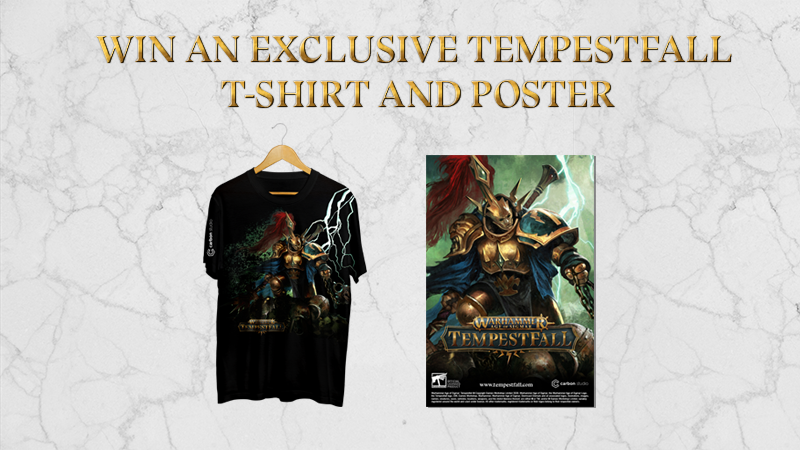